“One of my best mates was adopted as a child, after both his parents died. Then tragically, when his own son was 13, his partner died. I know how much Jigsaw (South East) helps devastated families and that’s why I’m fundraising for them.” 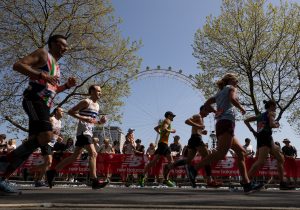 On Sunday Ricky Mowatt will be running the London Marathon for our child bereavement charity Virtually. The COVID-19 pandemic, forced the iconic event to scale down, and only the elite runners will be out in the capital, racing in a spectator free bubble.

Ricky is no stranger to running or fundraising. Earlier this year the super-fit Tolworth man, ran 10 marathons across 10 days. Then in June he took part in a global 24-hour race with 1100 other participants. He racked up 51 miles in total, which put him into the top 50 finishers worldwide, for distance.

Ricky says Sunday’s run will be a challenge in several ways. “I moved house to Maidstone in Kent just last weekend, so am brand new to the area, and literally have no idea where to run! I’m going to find a river, run 13.1 miles down it and then turn around and run back, I think!

“Training is always going well and I’m feeling stronger than ever and looking for a PB providing I can find somewhere flat enough”.

Ricky took up running in 2016 and says it saved his life. “I was 18 stone, overweight, with bipolar and Post-traumatic Stress Disorder (PTSD). I was encouraged to buy a sports watch and get fit, so I took to the roads, lost 44 kilos and haven’t looked back.”

We wish Ricky Mowatt and Ria Beal, who is also running Virtually for us, the best of luck. If you are in Maidstone on Sunday morning and anywhere near the River Medway, lookout for a Jigsaw (South East) vest-wearing runner, speeding past and cheer him on.

If you would like to help Jigsaw South East, you can find out here.

0 0 0 0
Previous : Previous Post
Next : Why Ria’s still running the London Marathon in October, just not in London!