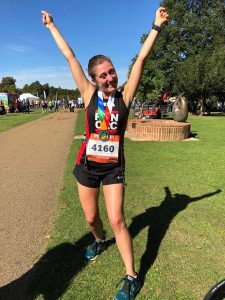 Ria Beal only took up running two years ago. However, in April she is donning her trainers for the iconic London Marathon, to raise funds for Jigsaw (South East) child bereavement charity.

This is the first year the East Grinstead based charity has a dedicated place and Event Executive Ria is delighted to have secured the spot:

“I’m 24 and like many people I’ve lost family and friends, but I cannot imagine what it’s like to lose a parent at a young age. The work Jigsaw (South East) does is so important and truly brilliant. I want more people to know about it.”

A gym hater, Ria said running had been life changing: “I suffer with anxiety and panic attacks and it’s been great at helping me de-stress. I started running after losing weight. I began with Parkruns, before joining Crawley Run Crew running club.

“Last year I did the Brighton 10k, Run Gatwick and the Run Reigate half marathon. I was jealous of my friends ‘runners highs’ and wanted that same feeling,” she joked.

As a regular club runner Ria’s been following a training plan designed by her coach. She has also been going to Tulley’s Boot Camp to build up her strength and stamina. She said: “I’m surprising myself with the distances I’m running and how great I feel afterwards!

“No run could give me a bigger buzz than the London Marathon, especially knowing I’m raising money for such a great cause. I’ve watched the race on TV every year and have heard stories about not wanting to be overtaken by a white rhino, so that’s definitely one of my goals!”

Sophie Bewley is the Fundraising Coordinator for Jigsaw (South East). She said:

“We’re delighted that Ria is running her first marathon for us. We’re a small charity and we rely on the generosity of people who go above and beyond to help us. We support families during a period of devastation, when they are at their most vulnerable. Ria’s brilliant efforts will help us continue our vital work.”

Ria is targeting a sub-four hour run and she only has one fear: “I’m worried about feeling so drained I cannot finish, although I am very stubborn so am determined not to stop!”

Before the big day Ria is spicing up her fundraising with a curry night. She hopes the events will help her raise £2000 for Jigsaw (South East).

Based at East Court Mansion in East Grinstead since 2012, Jigsaw (South East) offers support to children and young people in Surrey, parts of West Sussex and Kent, who have a family member with a serious, life-limiting condition. It also provides grief support to children and young people who have experienced the death of a significant family member through illness, accident, suicide or murder (through groups in Reigate, Guildford and East Grinstead).